1 2 3 4
Tutorial by Hans Martin Doelz
After retiring from my job, I began to create artwork, mainly abstract, based on photography as well as computer algorithms. Since I am drawn to converging lines and because running has been a part of my life since the late '60s, it seemed only natural to combine the two in an abstract photograph.
foo
Since I‘m attracted to lines, shapes and colors of things that we see in our daily life but do not recognize or analyze in detail, I had the idea to create an image that displays a very significantly reduced visual interpretation of a running track in a stadium. In my first picture, which was published by 1x.com in October 2013, a running track was displayed from the perspective of a 100 meter runner. In this image I wanted to show a different perspective.

First of all I needed to locate a suitable stadium. The preconditions were free access and a good condition of the markings on the running track. In most of the stadiums near my hometown this is not the case. Many of them, especially the running tracks, are in miserable condition, and often the markings are not bright enough.


"I made sure that the end of the lanes was aligned exactly horizontal, too, so that the composition was stable and balanced."

During my last vacation I was searching for a stadium where I could do my running training. Eventually I discovered a stadium where I found the best conditions, not only for my training, but accidentally also for taking my planned photos as a base for the image I had in mind. So I took my camera and revisited the stadium the next day. I decided to compose the elements in a way that the four numbers, "1 2 3 4," appeared centered, aligned exactly horizontal, and that the lanes vanished to infinity in the upper left area of the image. I made sure that the end of the lanes was aligned exactly horizontal, too, so that the composition was stable and balanced.

Below you see the original photo that still contained numerous elements that had to be removed in post-processing. 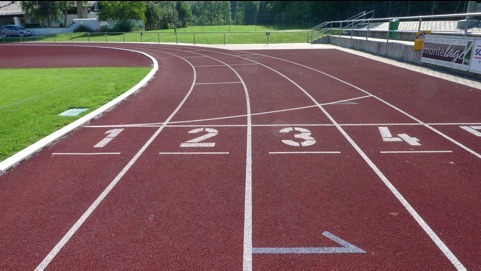 Generally I don‘t make any statements about what I want to express with my artwork. It‘s up to the viewer to dig beneath the surface, based on clues embedded in the image, like an archeologist searching for a hidden civilization.
Post Processing
The post-processing was done in Photoshop.

1) Perspective adjustment was not necessary.

2) Simple conversion to black and white and contrast enhancement. 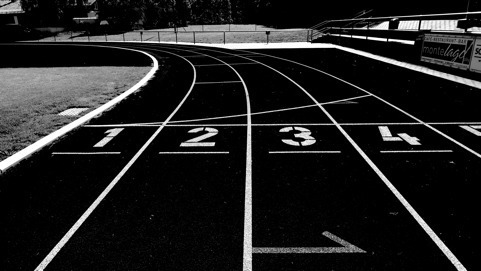 3) All areas except the lines and the numbers were wiped out with black color. 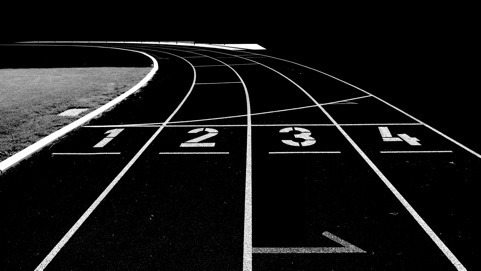 4) The demarcation between the grass and the track required special treatment due to the drainage holes that were present.

5) Particular care was taken to maintain the grainy structure of the synthetic rubber running track on the white lines and the numbers, while the black areas and the white demarcation line show no structure at all.

6) The small horizontal lines in the lanes beyond the finish line disturbed the clarity and simplicity of the image. They were removed also.

7) To add a special feature to the image, the mark in the foreground was colored red. This area was also treated very carefully by enhancing the color saturation while still maintaining its grainy structure.

8) Final adjustments were made to create an overall clearly recognizable structure. This was done with the black Brush at 400% enlargement.

9) The outer right line of lane 4 merges into the bright area in the background, so special treatment in that background area was required.

Tips
1) Try to perceive your environment in detail. Take enough time to consider how to take a picture and how to compose the structures. Envision what the final image should look like and plan the shooting of the picture accordingly. For example, in this case, it didn't matter what was included around the running track. I didn't have to pay any attention to the surrounding environment that I captured — I was going to remove it anyway, just as I had planned.

2) One of the great advantages of digital cameras is that you can review and delete pictures later, so shoot several pictures of the same subject while you have the opportunity.

3) Coming back to this image, the main elements here are lines: vertical, horizontal, curved and converging. On any picture, lines can be useful elements of composition, if utilized thoughtfully. It‘s this moment of deciding how to compose an image that turns an ordinary image into an extraordinary one.

4) If you're taking architectural images and you don’t have a tilt-shift lens, include as much of the elevation as possible in the frame to give yourself more opportunity to adjust converging vertical lines in post-processing.

5) While a tripod is a useful tool, you can travel without one and still take successful images using other methods to stabilize yourself or your camera.

6) Some kind of post-processing can be very time consuming and extremely boring. To achieve a perfect result, you have to do all of the steps very carefully. Don‘t become impatient. Consider spreading out the processing over many stages. With regard to this image, it‘s nearly impossible to work out the lines‘ edges at 400% enlargement in one sitting.
Biography
Born in Lüdenscheid, I now live and work near Stuttgart, Germany. I’m a self-taught photographer. Many of my images are inspired by lines, patterns and shapes that are found in the man-made and natural environment. My images are often created based on photography and on computer algorithms as well. After retiring from my job as a financial controller in the automotive industry, I fell in love with creating art and photography.

3. Enjoy tutorials
Subscribe to get full access to over 700 high quality photo tutorials on 1x Learning.
8.99/   MONTH*
By registering, you agree to our Terms and Conditions